In the late 60ies and early 70ies "our" scale of 1/72 was officially 25mm. So a lot of old figures labelled 25mm are in truth 1/72. One of my favourite blogs, the Plastice Pelisse shows a lot of this figures and their size.

Other good blogs are The Hinton Hunter or the old metal detector, just to show a few of the good ones.
My great goal is to get at least one figure each ever done in 1/72, no matter what material.

What is interesting, that today there are still figures labelled 25mm the same size as 1/72. Take a look at this photo here 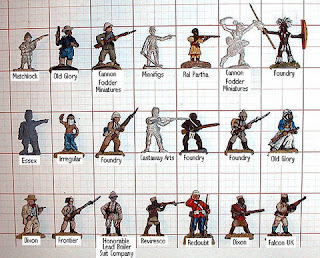 You could say that Minifigs is exactly 1/72. But beside the very old figures and the S-Range produced up to 1973 which are useful, the newer ranges like PB are in size 1/72 or true 25mm but too clumbsy. But seeing the size of the figure here is helpful to recognise which we could use to expand our collection. For example Ral Partha. I have all the historical Ral Partha figures in my collection. Some Colonials are too big, mostly the British. The "natives" on the other hand are great.

Frontier has exotic colonials like Italian, Moros or Phillipine Constabulary. The size is the same as a Zvezda figure but looks "stronger".


Sadly I have so far no Matchlock figure in my collection, but this will helpfully change.


Another bad roumer says that Imex/Emhar are history now. A pity as I have seen great masters at the Nürnberg toy fair. Maybe somone buys the mould and we will get this nice Peninsular British which I have seen several years ago there... 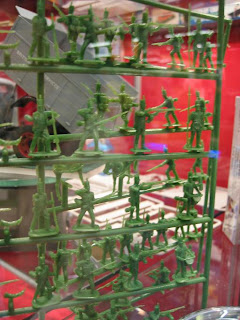