Here I can show you the next set for our Napoleon in Egypt range.

The Masters were made by Frank Ziegler and here is the text he sent me.

As far as the plates according to Chasseriau, which Yves Martin has published in his book The French Army of the Orient 1798-1801, can be believed, in some units there were worn the bearskins of the grenadiers and sappers with the new uniform in 1799-1801 in Egypt and Syria, after the regulations of General Kéber.
Here is the uniform version of the grenadiers of the 85e Demi Brigade de Ligne with the bearskins with front shield, according to the contemporary uniform plates I mentioned above. 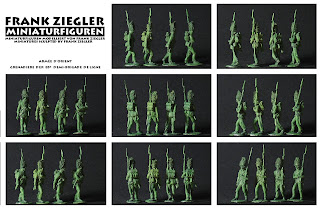 I would say these guys could be used on the European continent too.