And here the next set from Frank in addition to his already big range for this unit. 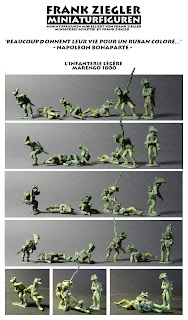 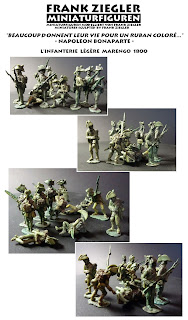 very useful poses for a diorama in my eyes.  And here his official text for it:


Here a group wounded light infantry soldiers for the Marengo - Range. They are sculpted for many posibilities of interaction with the whole range of these figures.
I wanted to attach here a quote Napoleon said about his soldiers:
No one likes to sell his soul. But many give away their lives for a colorful ribbon.  Here shortened, the second part of this sentence   "Beaucoup donnent leur vie pour un ruban de couleur..."
Of course the colorful ribbon refers to medals and decorations (especially the recording in the Légion d'honneur). Despite the temporal distance to the year of Marengo in 1800 - in the meamwhile the general Bonaparte becomes emperor Napoleon I., the sentence says a lot about the cool calculating mindset in regard to the soldiers, which risks their lives for his glory.
We see here the fotos of the sixpack of wounded soldiers interacting with each other and there, the other foto, interacting together with the sixpack of the soldiers in coiseez la baionette.
Eingestellt von Uwe um 05:51