Russian Rockets in the Russo-Turkish war 1853-55

Some of you know Hank and his faible for the Turkish army in the Crimea. I have posted photos from his Kalafat project somewhere here month ago.

Now he is working on the siege of Silistra and as Hank tries to do everything perfect, he now asked me what I know on Russian rockets which were used in the Crimea.

In my archive I have the book "Geschichte der Kriegsraketen und der Raketenartillerie im 19. Jahrhundert" by Hand-Dierk Fricke from which I translated some interesting parts on the subject. Strangely I was not able to send him the photos I made through my T-online account, so I thought it could be interesting for you too and here I can post the photos...

There was some change in the technique as they didn't worked too good then. The worth of the weapon was recognised in the 1840ies in the fighting against Shamil in Tschetschnia. It seems they had no wagons like the British but simple tripods loaded on mules.

In the meantime they suceeded in producing gun-rockets with which the sharpshooters were equiped (don't ask me how these looked like).

In 1854 the Russians had one Rocket-Battery with:

The Russian rockets have seen action at the siege of Silistra, battle of Babadag 1854, Karadag 1855 and especially at Kyuruk-Dara on the 24th July 1854.

In Asia operated the Russian army under General Count Bebutov. This army included two Rocket-units with 16 tripods attached to the 20th Don-Cossack regiment.  Russian history sais this rockets won a great battle against the Turks there.

And here are some photos. Sadly I have none about the card. If someone could help out I would be greatful. 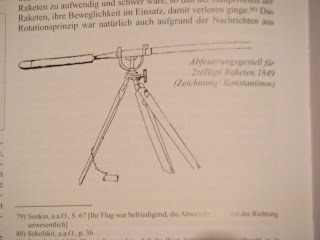 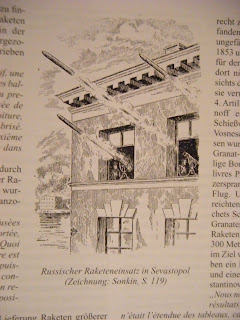 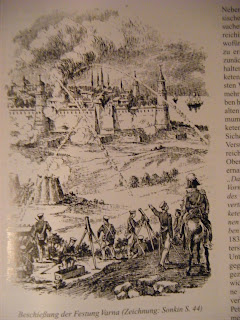 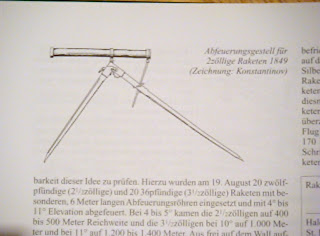