Last weekend I read an old Military history magazine which had an article about the battle of Palo Alto.

This war had always a litte fascination for me as we have a colorful army on one side and battles which involved not too much soldiers on the other side.

So for sure this is an option for a future diorama project.

Shortly after I finished the article I decide to clear up the hobby-room - ok, at least I tried.
I stumbled over the Hanoverian Landwehr figures, sculpted by Ingo which are available from Schilling-Figuren.

The Turnbacks of the coat ist mostly hidden by the equipment and I took liberties about the cuffs.
But see the result I had afterwards - US Infantry in the Mexican-American war:-) 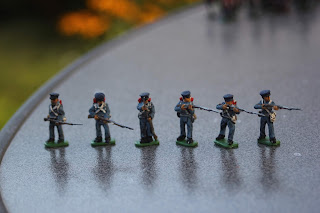 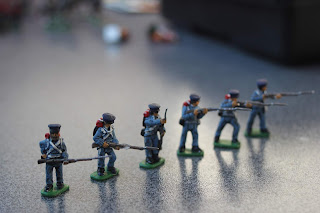