As the colonial wars are my favourite subject I always thought about making a diorama for the most
colourful of them - The Boxer-Rebellion.

We have the following figures on the market:

Redbox - the whole range. Well, the quality...
Orion - Very nice boxers, but too few regular chinese
HAT - WW1 Russians - a simple paintjob to have them in 1900 colours
http://www.hat.com/Othr6/Wild02P.html
ESCI/HAT/ACA -British colonials - can be converted to a lot of European units
HAT - British sailors. Head swops to other nations possible
Pegasus - Even their WW2 Russian sailors would be useful

Kennington had a nice range for the boxer Rebellion. Now maybe SHQ, but I found especially the boxers not in their listing.

Stan Johansson has a range too. A very nice selection, but the quality again...
http://www.stanjohansenminiatures.com/boxer.htm 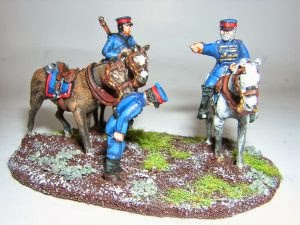 And you can find a lot of other stuff if you search the web. Some day I think I will complete the listing of figure-manufactors in this blog....

But what is really great is again Dr. Afred Frankensteins conversion cabinet:-) Years ago he put the idea of this project at the homepage of  Kai Fuhrmann together with an article in German. If you want to enjoy this and take a look at ideas like the following photos, check the link.

What holds me back from a diorama of the battle of Tientsin are buildings. Has anybody an idea where I can get Chinese style houses in 1/72??
Eingestellt von Uwe um 05:06