You know that I have my anual diorama with my friend Schmitty and other guys. This year it is Rocroi, for the next year we thought about India 1783.

But we need to paint a lot of figures from as we have no French infantry and only the old Italeri set which has not really good poses. Maybe I will try to produce our own French infantry through Hagen?

For 2015 we had the idea of creating the battle of Azincourt 1415, especially as I just heard Bernard Cornwell's novel about it as an audiobook:-)

Accidently I came over this diorama from the Italian Soldatini online forum. I thought this might be
interesting for you too.

Paul also wrote some time ago on Benno's forum that he thinks about working on this battle, so I guess in two years we will see a lot of good painted French cavalry with a colourful herarldry:-)) 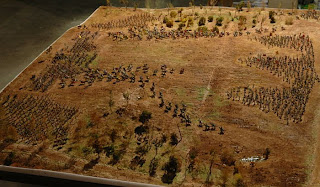